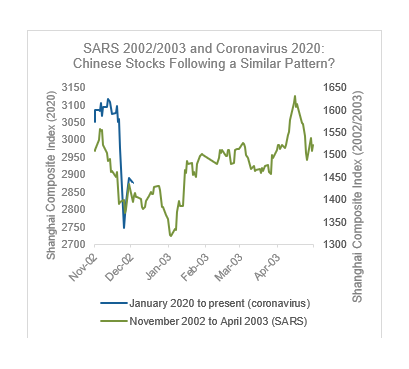 CORONA VIRUS AND THE MARKETS

The Wuhan coronavirus has unnerved global equity markets so far in 2020. While still early, compared to the SARS outbreak in late 2002/early 2003, investors are concerned about the possible impact to economies and on markets.

However, to date, Chinese stocks are responding in a manner remarkably similar how they reacted to the SARS outbreak in late 2002/early 2003. That is, after an initial shot straight down, equities stabilize and start to rebound as they digest the economic implications of the virus and government responses.

If markets continue to follow the SARS template and the policy response from Chinese and other central authorities calms investor nerves, already relatively cheap international stocks could receive an additional boost.

After the coronavirus was first reported to the World Health Organization (WHO) on December 31, 2019, global equity markets took a hit of varying degrees, with emerging market stocks falling over 4.6%. While reminiscent to the SARS outbreak in late 2002/early 2003, investors have been tempted to extrapolate a far more damaging and lasting impact from the coronavirus. For example, more deaths from the coronavirus than SARS have already been reported, and the response of Chinese authorities has been more forthright in quarantining entire cities. Such measures will certainly have more immediate and knock-on effects to global growth than during the SARS episode, given China has gone from the world’s sixth to second largest economy during this time.

Equally impressive, however, has been the response of China's central bank, both in terms of injecting liquidity into the system and lowering targeted borrowing rates to soften any near-term market impact. It is perhaps due to these aggressive measures that Chinese stocks seem to be tracking the sharp sell-off and V-shape recovery pattern that they did during the earlier SARS episode (chart below). It may be that markets are seeing through this short-term volatility and anticipating only a brief (though substantial) drop in global economic growth. While it is encouraging that markets are currently following the previous SARS script, it should be acknowledged that a V-shaped recovery is not a given. Indeed, investors may still be tempted to dump international and emerging market stocks amid the unknown and open-ended nature of possible contagion. As a buffer against that uncertainty, it is helpful to remember that international stocks are trading at a fairly steep valuation discount relative to their US counterparts (chart below). At such inexpensive levels, foreign equities could offer investors an attractive source of additional returns, and certainly argues for portfolios remaining globally diversified.